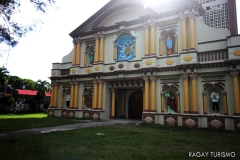 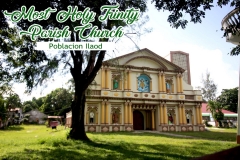 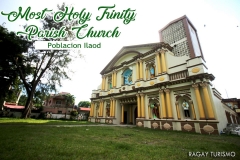 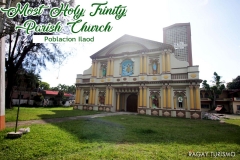 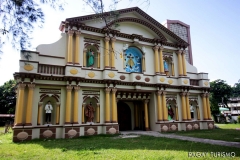 The first settlement in this place was organized at the right side of Pacolago River and the people named their community Pacolago. Its proximity to Ragay Gulf, however, made it an easy prey to pirates who often raided the place and killed natives after looting their properties. So the natives decided to move to a site in the upper part of the river which they thought would be safer. They gave their place a new name, Ragay, meaning a place with one belief, religion, customs and traditions. The people were also united by one objective which was to defend Ragay from the pirates.

Then they move to a place called Sampaloc until the arrival of the Spaniards which also ended Moro piracy. Remnants of the concrete walling of the old church and cemetery are still to be found today.

The parish was founded in 1753 when it was finally separated from Lupi. The first church was made of bamboo and nipa and dedicated to the Most Blessed Trinity.

In 1829, when the division of Camarines was effected into Norte and Sur, Ragay was made a part of Norte until October 1846 when it was reverted back as part of Camarines Sur.

A bigger church was made from molasses and lime but when the Americans came and burned the town in 1900, the church was not spared including the altar and the images of the big patron saint.

Church reconstruction was initiated in 1920 under the later Cirilo Aquino. A priest was also assigned, Very Rev. Juan Baron. Before this, a priest from Libmanan would go to Ragay for weddings, fiestas, and the administration of other sacraments.