Ragay is 367 kilometers south of Manila, and 67 kilometers north of Naga City via Andaya and Maharlika Highways. It is bounded in the north-east by the province of Camarines Norte, on the north-west by Del-Gallego, on the south-west by the Ragay Gulf, and Lupi on the East.

The land area of Ragay is around more or less 27,240 hectares or 2752.40 square kilometers. It is over 27 kilometers long and more than 21 kilometers at its widest point.

It is composed of 38 barangays; 9 of which are along the coast of Ragay Gulf; 2 are in the Poblacion area; 11 are traversed by the Quirino Highway, while the rest are in the upland or lowland portions of the municipality.

Commercial activity is largely concentrated on small retail businesses. This explains a large number of sari-sari stores in the area. Agri-industrial enterprises are also engaged in the retail business. Other commercial and industrial activities in Ragay, include furniture making, food catering, barbershop, beauty parlors, repair shops, and others. 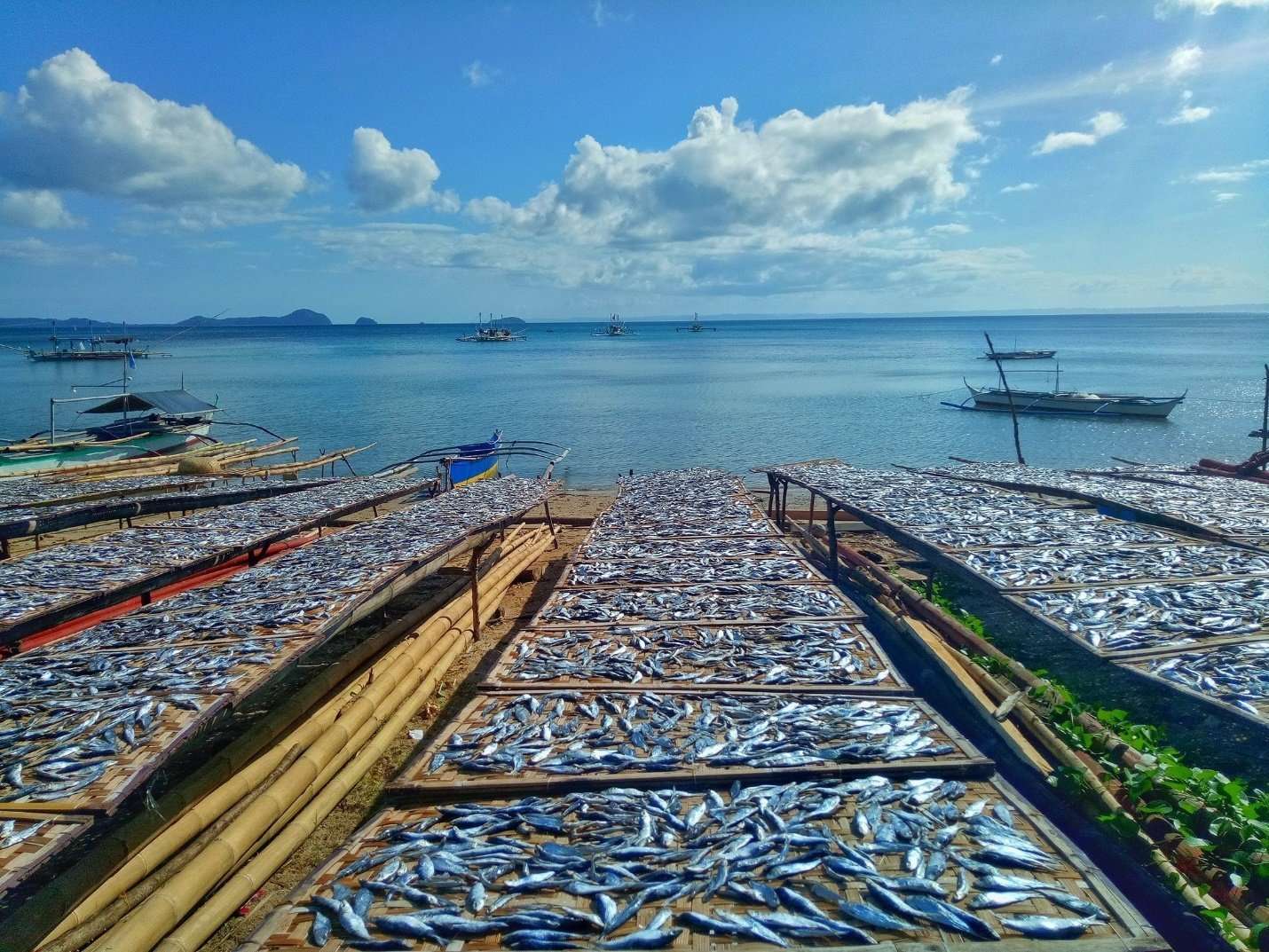 Ragay is hemmed between Ragay Gulf and the mountain ranges of Mt. Labo. The coastline covers more than twenty-seven (27) kilometers. 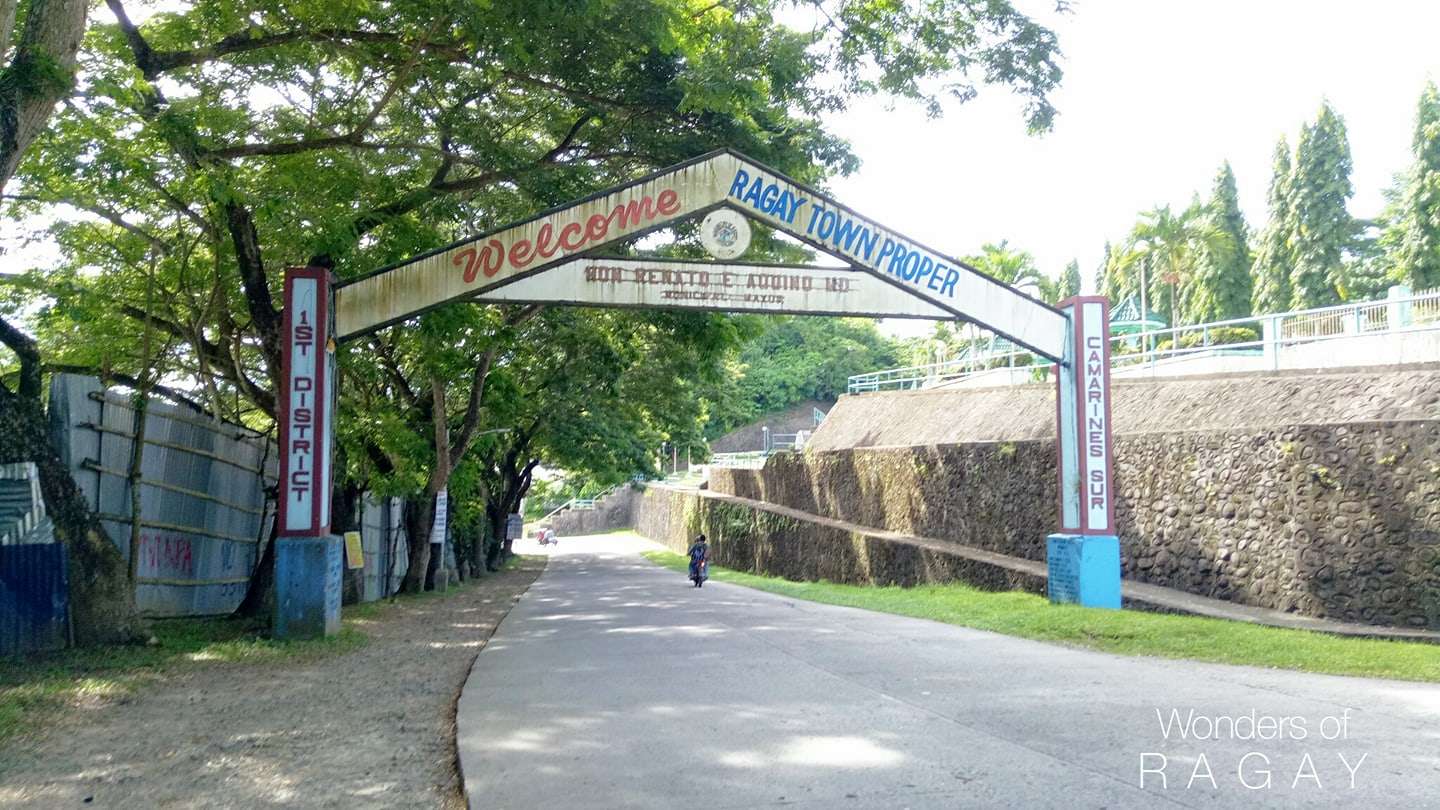 Ragay suited 67 kilometers north of Naga City can be reached by all kinds of land transportation with a maximum of 2-hour ride. It will pass along via Maharlika Highway and Andaya Highway.

Public Utility Jeeps (PUJs) serve as the main transportation going to Ragay from Naga City LCC Terminal. Regular fare cost 75 pesos for each person with a maximum capacity of 22 passengers in each jeep. From Naga to Ragay, the first and last trip is 5:30 in the morning and 4:00 to 4:30 in the afternoon respectively. Going back to Naga, the first trip also starts at 5:30 in the morning and the last trip is 5:30 in the afternoon. The jeepney terminal is located at Brgy. Poblacion Ilaod at the town proper.

Major bus companies with routes Bicol – Manila have regular stopovers in the municipality. The regular fare riding in an ordinary and air-conditioned bus from Nagato Ragay is 100 pesos and 130 pesos respectively. The first trip from Bicol to Manila starts at 7:00 am. It can also be reached via van (Naga to Del Gallegoroute) with a regular fare of 100pesos.

Tri-mobiles, jeep, and the local “habal-habal” are the major modes of transportation going around the barangays and the upland areas in Ragay. Trimobile terminal is located in Bagong Pook crossing and in front of Aquino Comprada in Brgy. Poblacion Iraya. Motorized skates and non-motorized skates are also used to transport people and cargo in barangay located near the Philippine National Railroad (PNR) tracks. 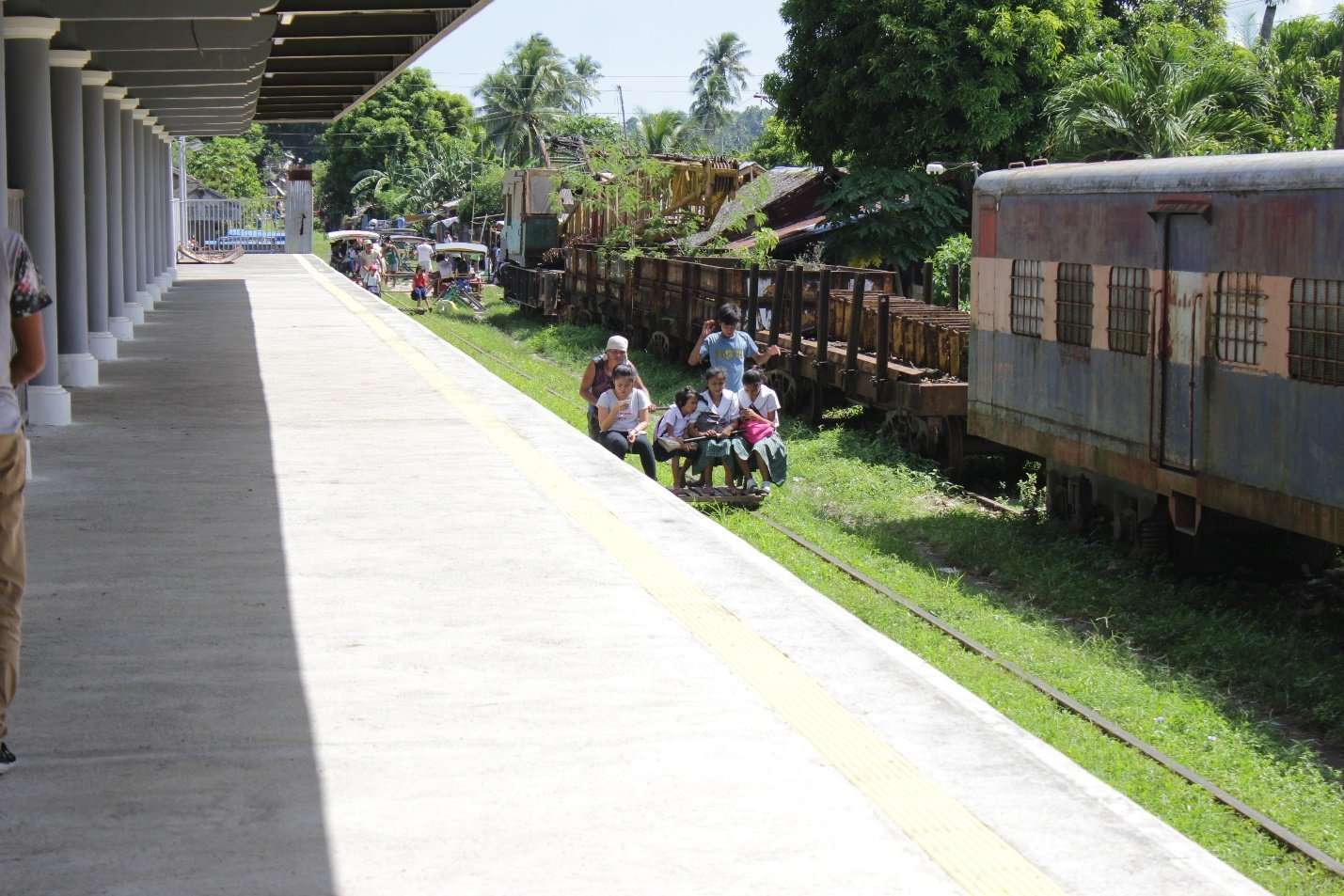 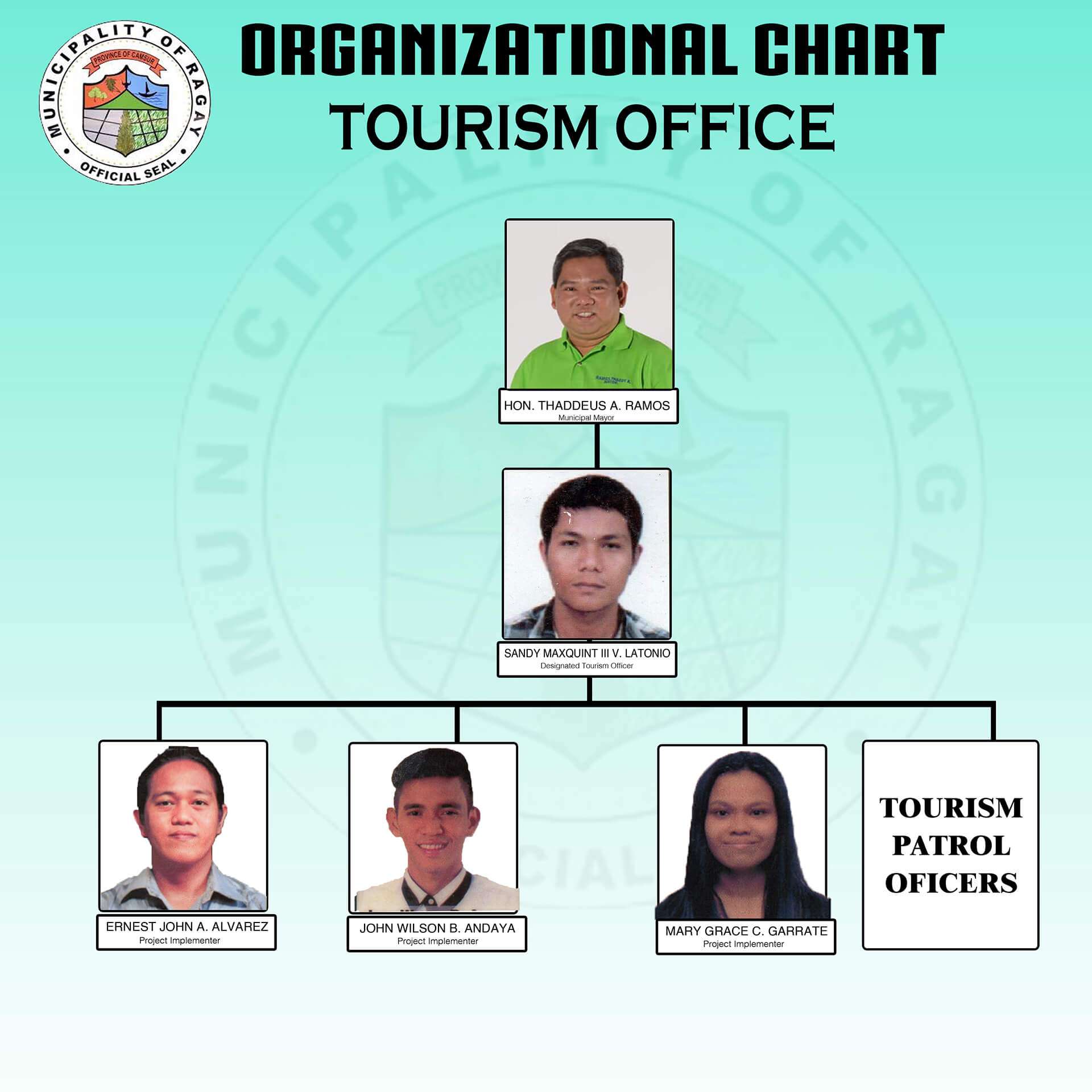 We envision Ragay as a peaceful and growing tourist destination and trading town with empowered people who nurture local culture and arts and sustainably manage their resources through shared and service-oriented governance.

Promote Ragay as a destination for natural attractions by creating a tourist and business-friendly environment, sustainably managing the town’s resources and cultural heritage while fostering peace, prosperity and health for the benefit of Ragayanos.

From Naga City LCC Terminal, Public Utility Jeepneys (PUJs) with a maximum capacity of 22 passengers serve as the main transportation going to Ragay. Regular fare cost 95 pesos per passenger. The first and last trip is scheduled at 5:30 in the morning and at 4:00 to 4:30 in the afternoon, respectively.

On the other hand, from Ragay going to Naga, the first trip also starts at 5:30 in the morning and the last trip at 5:00 in the afternoon. There is no jeepney terminal yet in the municipality but a major stop over is located beside Andaya Park.

Major Bus Companies with Bicol to Manila routes have regular stopovers in the municipality. The regular fare riding in an ordinary and air-conditioned bus from Naga to Ragay ranges from ₱ 97.00 to ₱ 130.00. The first trip from Naga going to Manila route starts from 7:00 in the morning at Naga City Central Business District Terminal.

Ragay can also be reached via van (Naga to Del Gallego route) with a regular fare of 100 pesos or via mini coaster with the regular fare of ₱90.00 to ₱100.00, whether ordinary or air-conditioned. Jeepneys, tricycles and habal-habal are the mode of transportation going around the barangays and upland areas in Ragay. Motorized and non-motorized skates are sometimes used to transport people and cargo in such barangay with railroad tracks.

Most of the barangays with potential tourist attractions are accessible through farm-to-market roads and are connected via road networks. The most part of the roads are concrete while some portions remain all-weather roads. 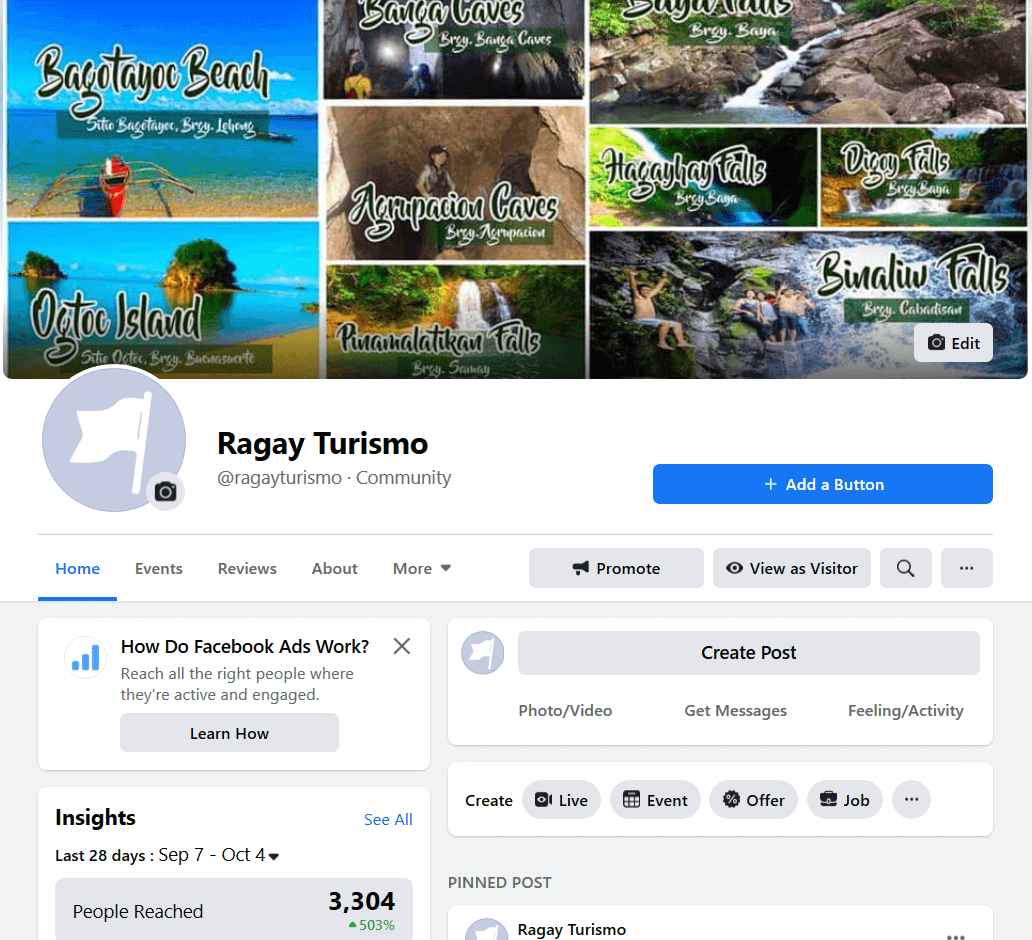 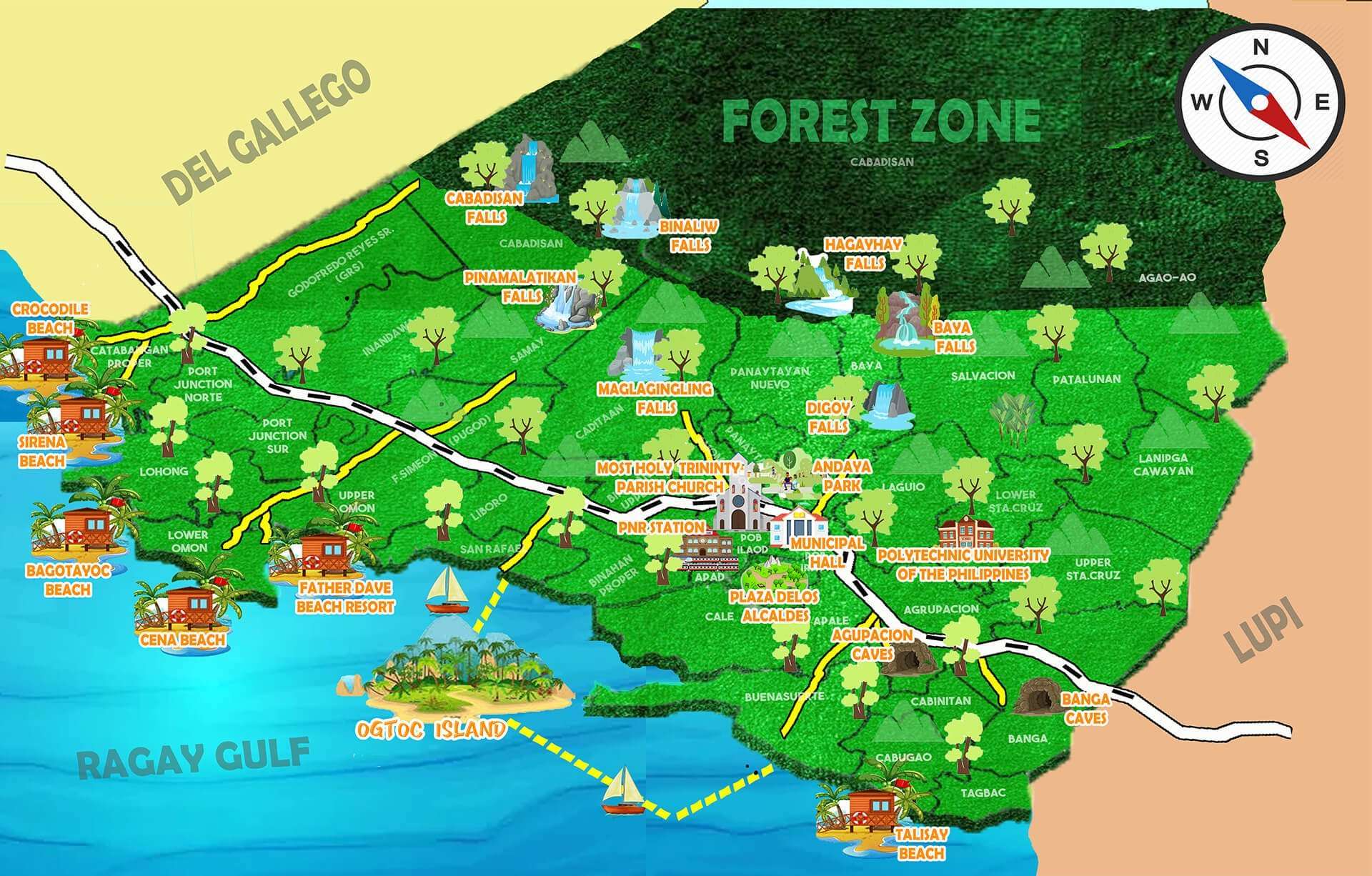 Support facilities present in Ragay include accommodation, financing, medical entities, eateries, and local crafts that can cater the basic needs of tourists.

No matter what purpose of the visit is, there are 3 lodging facilities situated along Andaya Highway where tourists and motorists can stay, namely:

Have 3 to 4 single and double bedrooms. They offer very affordable rate ranging from ₱300- ₱400 per night. Each room is fully air-conditioned with television and private comfort room. They also offer bed and- breakfast, lunch and dinner meals.

Is a 2-storey building with 12 rooms. This lodge inn offers not only the amenities mentioned above but also family rooms which can accommodate five to six persons ranging from ₱400 to ₱450 per night.

Financial facility is also essential in case of emergency and money needs. Situated in the town proper are the following financing corporations, viz:

These eateries offer local cuisines, short order menus, kambing delicacies like papaitan and caldereta, bulalong baka, seafood such as, but not limited to, prawn and crab delicacies.